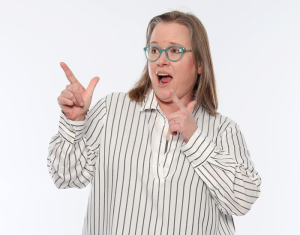 Joined the Entrepreneurship Team in 2018

Johanna Smith is a Professor of Theatre Education, Improvisation, and Puppetry at CSU-San Bernardino. Her research and practice focuses on integrating puppets into classrooms as well as professional Theatre for Young Audiences. She has served as a puppetry artist for Broadway-bound extravaganzas to museums to colleges to preschools, and often directs tours for CSUSB. She is also fond of International tours: Her production of The Odyssey (director, puppet design) toured to the PuppetFair puppet festival in Sofia, Bulgaria in 2008, followed by a tour of 4 major Chinese cities for the Chonqing Children's Theatre season in 2009. She has written and received grants from the National Endowment for the Arts and TCG. She created and teaches one of CSUSB's most popular courses, The Cultures of American Childhood, a Humanities offering that is highly sought after by all majors. She teaches improv and is a proud graduate of the Second City sketch comedy writing program (LA). She serves as a board member of the American Alliance for Theatre & Education (www.aate.com). She believes in the power of laughter and creative re-use to inspire a love of learning.

My favorite entrepreneur is a tough one, because it's a toss up between Shari Lewis (and Lambchop) and Jim and Jane Henson (the Muppets). Both took their puppetry talents and created strong businesses! Jane Henson isn't often given full credit for her contribution to the business side of the Muppets, but it was a true "Mom and Pop" operation at first!